Carrying professionally printed signs, a group organized by the Oakland County Republican Party protested outside and inside the Farmington Public Schools board meeting, upset over a 21-day "equity challenge" on the district's website. 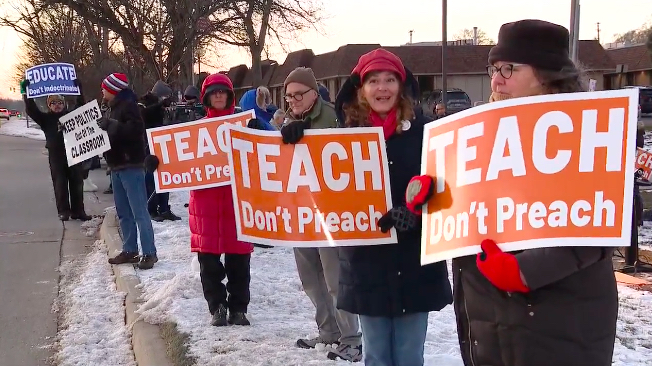 Demonstrators outside a Farmington school board meeting Tuesday (Fox 2 video)

The challenge material was not used in any class and appears to no longer be online. The Detroit News reports it wasn't even intended for students:

The district’s optional “21-Day Equity Challenge" was open to staff and residents in the district in an online program that did not become part of the curriculum. Held in November, it was modeled after a similar initiative by the United Way for Southeastern Michigan and “curated to contain information about the very diverse population within our own community,” the district said.

Nevertheless, the inclusion of a Black Lives Matter demonstration in one exercise was enough to bring about 80 protesters to the meeting, led by the county Republican party and a group called Moms For America.

"These racially dividing initiatives … are wrong, period," said Debbie Kraulidis, a leader with the national Moms for America, during a press conference that accompanied the protest held before the board meeting.

It's unclear how materials on a website constitute indoctrination. Administration members who spoke at the meeting said the protesters took parts of it out of context, but what else is new?