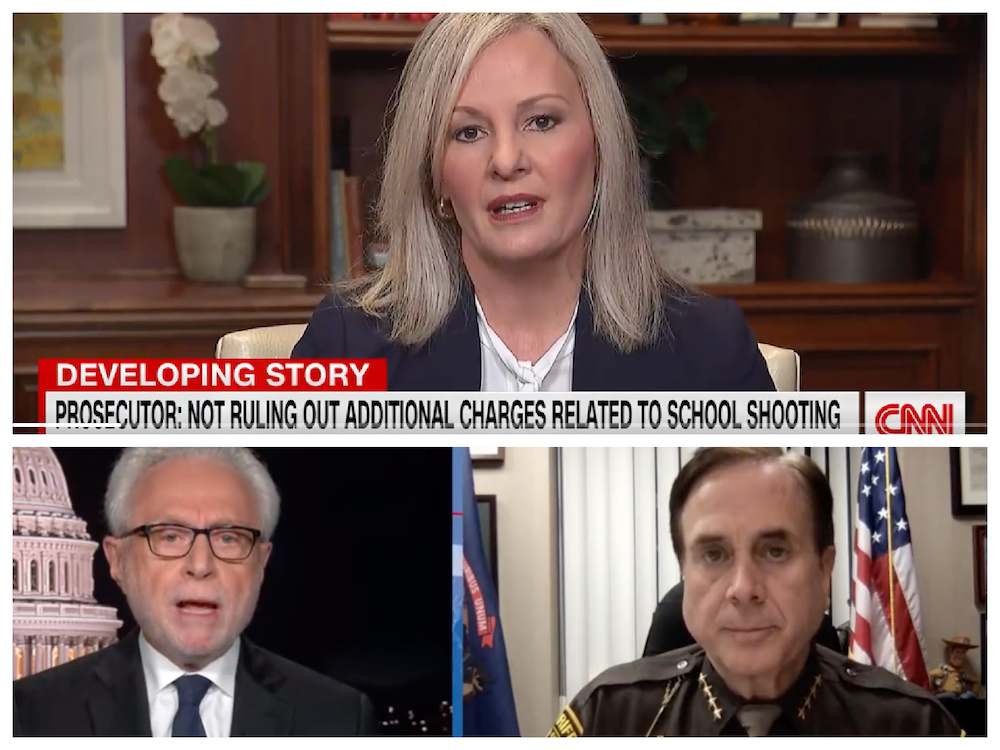 The tragedy in Oxford last week is about four children who were murdered and another in an Oakland County lockup who's accused of killing them.

It's about four kids who won't see Christmas. It's about 11 devastated families having to find a way to go on. It is about a community trying to make sense of the senseless.

This is not about political careers, or election cycles. This is not about "Today" show appearances. But that's where our elected representatives here in Oakland County have decided to take the Oxford High School tragedy. It has become a distasteful and self-aggrandizing scene.

There they are: Karen McDonald, the county prosecutor, and Mike Bouchard, the county sheriff, drawn to the cameras like moths to the porch light, appearing on Wolf Blitzer's or Anderson Cooper's or Don Lemon's shows, or sometimes all three in a row.

It appears the rush to the dim bulbs of cable TV has distracted them from doing their elected jobs effectively. The prosecutor decided last Friday that she was going to announce charges against the parents of 15-year-old gunman Ethan Crumbley through the media. The sheriff went on TV to complain that the prosecutor never informed him that charges were coming, and that he only learned of her intentions through media reports.

The prosecutor took to CNN afterward, insisting the sheriff's department did know. “I don't know where the lack of communication was," she told Wolf Blitzer. "And honestly, I don't care.”

She should have cared. At that very moment, James and Jennifer Crumbley were on the run. Only by the grace of good fortune did we not end up with two more bodies and another brutal round of televised finger-pointing.

Prosecutor McDonald has since changed public relations firms, I am told.

Without a doubt, it is grueling and important work our law enforcement officials are doing.

Having said that, the prosecutor should have informed the sheriff that she was seeking charges. The sheriff then would have put a surveillance team on the Crumbleys. The judge would have signed the arrest warrant. The sheriff would have made the arrest. And only then should there have been a press conference.

But it didn't happen that way. Bouchard and McDonald must have missed each other walking down the virtual hallway preparing for their morning news hits – not local outfits, where wounded citizens seek answers – but over the airwaves of national outlets broadcasting from the concrete canyons of Manhattan.

We need answers here at home. Not acrimony. We need leaders, not talk show guests. Why does Nessel appear on the Don Lemon show on Monday night, a week after the horror, bemoaning the fact that the Oxford Community Schools declined her offer to conduct a third-party review of last week's shooting rampage.

“I'm disappointed,” she told Lemon. “Obviously, we hope the school district cares as much about the safety of their students as they do shielding themselves from civil liability.”

How does that help anyone, Madam Attorney General? Most people are under the impression you can investigate anything you want. If the school district doesn't want you, how about the nursing homes?

"Stop the grandstanding," the parent of one of the survivors told me.

Presumably Bouchard and McDonald will find the time and a willingness to work together to conduct a thorough investigation. One that will bring justice and change to not only the families of Oxford, but to the greater community of Michigan. They need to do this face-to-face. Not through the telephone or Twitter or the TV screen.

Enough with the cable news shows already. A sober press briefing once a day will suffice. Let Oxford bury its children with dignity.