If you found your jaw on the floor upon learning that Oxford school shooter Ethan Crumbley's parents bought him the gun used in the attack and did not take action (along, to some extent, with school officials) when it emerged he'd drawn a shooting scene just before, your response was justified. 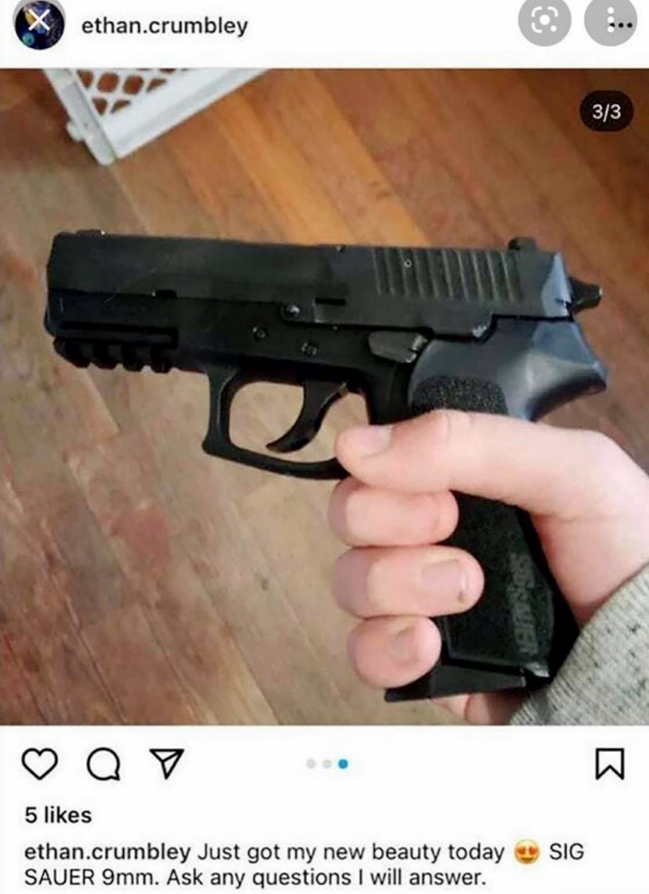 "I know of no other case involving such stark details of alleged parental negligence and involvement," writes Mother Jones editor Mark Follman, who has studied mass shootings for the past decade and is releasing a book on efforts to prevent them.

For those who need catching up, here's a timeline based on information released Friday by the Oakland County prosecutor:

• Nov. 26: James Crumbley goes with Ethan to Acme Shooting Goods in Oxford to buy him a gun for a Christmas gift, as a subsequent social media post by Jennifer indicates. Ethan posts a picture of the gun, writing: "Just got my new beauty today."

• Nov. 29: School catches Crumbley, 15, searching ammunition on his phone, leaves voicemail for and sends email to his parents, Jennifer and James Crumbley. The parents do not respond. Instead, Jennifer texts her son "Lol, I'm not mad at you. You have to learn to not get caught."

• Before shooting: Parents keep the gun in an unlocked drawer in their bedroom.

• Nov. 29, day of shooting: Teacher discovers Ethan drew a picture of a semi-automatic weapon and person bleeding with bullet wounds with the phrases "the thoughts won't stop, help me," "blood everywhere," "my life is useless" and "the world is dead." Crumbley's parents are summoned to the school for a meeting with their son but "resist the idea of him leaving" and Ethan continues about his day with the backpack where he was believed to have the weapon. They, nor school officials, look in the backpack, which he has brought to the meeting, or ask whether he has the gun that was purchased for him days before.

• Dec. 3: James and Jennifer Crumbley are charged with four counts each of involuntary manslaughter as the investigation continues.

Asked by Follman about the revelations, a longtime threat assessment expert called them "next level."

The expert, who specializes in school security, said: “I’ve seen many uncooperative or belligerent parents over the years dealing with threat investigations, lots and lots of denial. It can understandably get emotional. But no, I cannot recall a case where there was this kind of enabling going on, from what this one looks like, at least at a distance."

There is at least one prior high-profile school shooting in which a parent purchased a gun for his son: Kipland Kinkel, a student who carried out a massacre at Thurston High School in Springfield, Oregon, in 1998, had obtained one of several weapons that way. Kinkel subsequently killed both of his parents at home the day before his rampage, in which he killed two students and wounded 25 other people. Kinkel remains in prison for life without chance for parole.

Ethan Crumbley faces two dozen charges, including terrorism and first-degree murder. He's been charged as an adult and would likely be sentenced to life in prison if convicted.