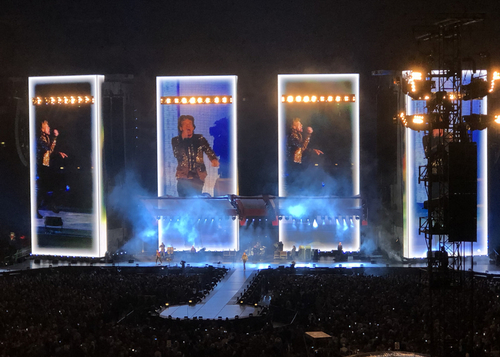 I agreed to go to the latest Rolling Stones show in Detroit because of the symmetry.

I’d seen the Stones the week after my high-school graduation. Cleveland Stadium, 1975. Twenty-one years later, I had a baby. She grew up and went to see the Stones three weeks after her high-school graduation, at Comerica Park in 2015. In 2020, the year this show was originally scheduled for, five years would have passed since her show, 45 since mine. Big numbers, round numbers. I could put a seal on that memory and move it to the basement.

The show was postponed indefinitely for Covid. Then drummer Charlie Watts died. Mick Jagger had already had heart surgery, and Keith Richards...well, you know about him. You wonder why they still bother to hit the road. They’re all rich as Croesus. Why not stay home and enjoy the grandchildren (and great-grandchildren, Mr. Jagger)?

The 2020 show finally happened, almost 18 months later, at Ford Field Monday night. I told my seatmates I planned to let it wash over me. The Stones have been at this longer than anyone – literally anyone on the road now or ever, having outlasted the Duke Ellington Orchestra some years back. It would be technically perfect, carefully calibrated for maximum fan enjoyment. I expected entertainment and it was entertaining. But it was also, unexpectedly, moving. 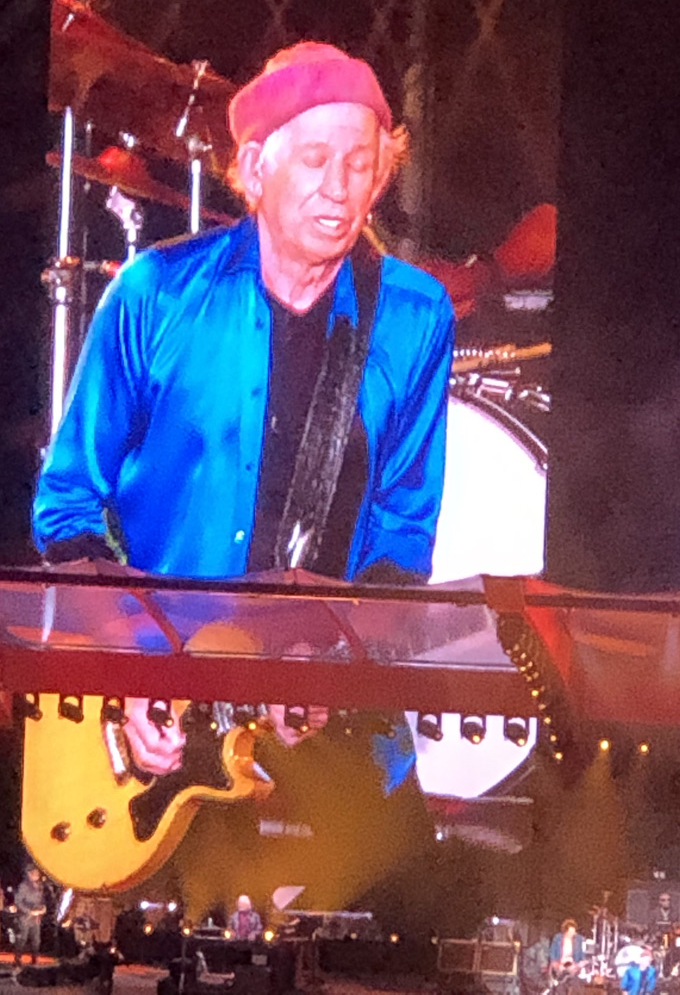 Keith Richards, doing what he does best

At any stadium show, the most important crew member not onstage is the video director and switcher, without whom the experience would be like watching ants scurry around on a dinner plate at the other side of your front yard. God bless the Jumbotron, which allows you to be sure the people onstage are who you’re paying to see. The stage lights go up, and you take attendance: There’s Mick, sporting more hair than he had at 20 (smirk). Ron Wood, craggy-faced and black-haired (smirk). The replacement drummer. The keyboard and horn players, background vocalists, necessary but not who you came for.

And then, there he was: Keith Richards, the only one onstage who appears to have no physical vanity (although when any older man is never photographed without a hat, you can make some assumptions). Richards, more than Jagger, is the true face of this band that’s been around longer than many of their fans have been alive. And his face is spellbinding.

A map of an artist's life

His dried-apple wrinkles are deep, his jowls loose, his earlobes – so often, throughout his life, festooned with feathers and other baroque decorations – pendulous. He wore a pink knit beanie throughout, tufts of silver-white hair sticking out all around. And his face was matched by his hands, which the cameras found often, as he played a series of guitars throughout the show, each handed over by a black-clad roadie. His posture is often hunched, a pose that looks half chosen and half chosen-for-him.

Jagger, the strutting banty rooster, pulls the focus, but Richards is who I watched, not so much prowling the stage as strolling, sometimes playing face-to-face with Wood or Jagger, but mostly in his own world.

This was more than just elder-gazing. As the show steamed on, gathered power, crackled through the classics – which remain classics, and will always be classics, because sorry kids, “Smells Like Teen Spirit” is a great song, but it’s not even two-thirds of “Sympathy for the Devil,” and they kicked that one up to the rafters – I thought more about mortality, about aging, about raging against the dying of the light. About the snark I’ve heard for decades now, about old people in an art form invented by and for young people, but what are you supposed to do when you’re the best on the planet at whatever it is you do? When you’re an artist, and you can still make your art? Retire?

These guys, the Rolling Stones, are teaching us all a lesson about how to grow old. It helps to be rich, of course, but the most important part is to enjoy it all. OK Boomer, my ass.

Occasionally the camera would catch Jagger and Richards in the same shot, Mick dancing, Keith smiling. You wonder what they think about when they take the stage. The ringing of the cash register? The effectiveness of arthritis medication? How to make songs they’ve played thousands of times interesting again?

Or maybe just this: We’re all going to die someday. But not today. Until then, rock on.