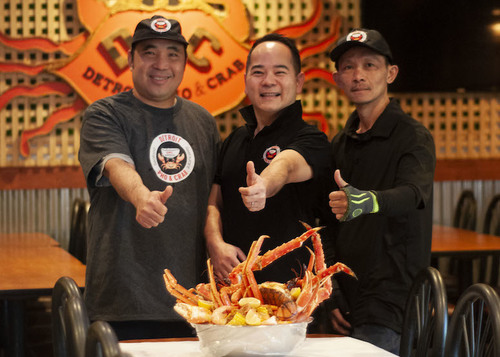 Crustaceans make the cover of this week's Metro Times as the alt-weekly spotlights a handful of local chefs putting their twist on the seafood boil tradition more commonly associated with Louisiana.

Across metro Detroit, seafood boil restaurants are stuffing glorious tangles of spiny king crab legs, slender snow crab legs, shrimp, crawfish, and lobster into bags studded with corn, potatoes, and sausage. The bounty is submerged in big-flavored butter sauces enhanced with ingredients like garlic, herbs, and lemon, and sometimes the package is spiked with what seems like handfuls of cajun spices that render the liquid a deep burgundy.

Chefs package the seafood in clear plastic bags that are typically placed in buckets before being plunked down on a table. Diners tie on a bib, pull on a pair of plastic gloves, and start peeling, cracking, noshing, and dipping while knocking back beers.

The seafood boil ritual is cartoonishly sloppy and a bit of a carnal affair, and it’s super popular. In recent years, about 20 boil purveyors have cropped up around metro Detroit, with names like Mad Crab, Crafty Crab, Saucey Crab, Crab House, Crab Hut, and Krazy Krab or Crazy Crab. Saucey Crab and 168 Asian Mart now host karaoke nights with their seafood boils, and acclaimed chef Max Hardy’s take on the genre, What’s Crackin’, is expected to open soon on Detroit’s Avenue of Fashion.

Restaurants visited by the alt-weekly include: