Dave’s Hot Chicken, whose investors include celebrities Samuel L. Jackson, Maria Shriver and rapper Drake, is opening a restaurant at 22208 Michigan Ave. in Dearborn on Friday with indoor and outdoor seating.

Chicken tenders and sliders are offered with seven levels of spice, ranging from no spice to "The Reaper" -- which comes with a written warning of intense heat that could bring stomach trouble. Optional sides are kale slaw, mac and cheese, regulkar fries or cheese fries.

The franchise is part of a chain named for chef Dave Kopushyan, who launched it with friends Arman Oganesyan and brothers Tommy and Gary Rubenyan in 2017 after they scrounged up up $900 to put a tiny stand in an East Hollywood parking lot.

On their website, the group tells the story of their pop-up start in the Southern California lot:

Arman created Instagram buzz and the lines began to grow. Two nights later, Eater/LA showed up to see what the fuss was about. The next morning's headline read "East Hollywood's Late Night Chicken Stand Might Blow Your Mind. Almost instantly, the lines stretched around the block. 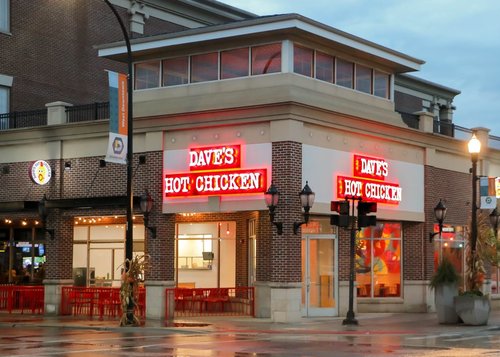 Eventually, they got celebrity investors. Today, the company has about 25 California sites and restaurants in Dallas, Houston, Las Vegas, San Diego, Toronto, Denver and -- since July -- suburban Chicago. It repportedly has sold rights for nearly 500 franchises in the U.S. and Canada.

The Los Angeles Times writes about the chicken:

If you are afraid of hot chicken but want to flirt with the idea of burning your mouth, there’s a Lite Mild level of heat.