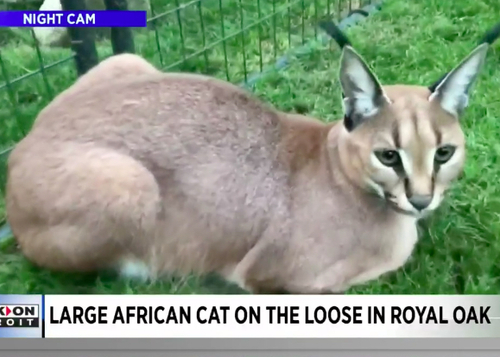 WDIV's Night Cam on the case of the escaped caracal. (Photo: Screen shot)

The Pamp tells the Freep it was a wild ride.

The WDIV "Night Cam" reporter spent 18 consecutive hours in Royal Oak this week — not chillin' at Mr. B's or whatever new restaurant has taken its place, but hunting for a wild cat native to Africa that escaped from a suburban backyard where, yes, it was living.

In the intervening hours, Bam Bam's owner, 62-year-old Elaine Westfall, invited media to her backyard, where she harbors three other such cats, and shared that she'd spent tens of thousands of dollars to procure them and set up cages.

Now, in a tragic twist for the cat mom, the paper reports the African caracals' stay in Royal Oak could be in jeopardy:

Royal Oak police have issued Westfall five citations and given her, according to the police chief, until Monday, to make sure the cats leave the neighborhood.

In response, Westfall said she's not sure the police have the authority to make such a demand. And even if they do, Westfall said, she doesn't know where the cats could even go. They're not like house cats.

This is not just, 'Here, take my kitty.' This is take my cat, my big cat, and take care of it for the rest of its life or until I can come get it. It is a responsibility. You can't just hand it over to anybody."

Westfall said she's terrified that law enforcement will just come to her home and seize her fur babies — never to be seen again.

Though Westfall says her cats are gentle, some neighbors were unnerved given that they weigh 50 lbs and eat birds, rodents and small mamals. Police said Wednesday also wasn't the first time they'd escaped.