How right-wingers are meddling in Michigan's nonpartisan redistricting effort 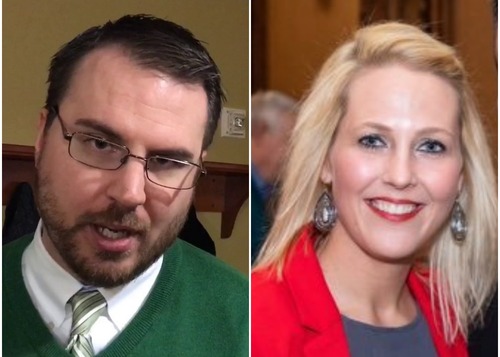 Daunt and Reckling are Republicans with Fair Maps.

Right-wing groups with ties to Betsy Devos have reportedly been undermining the work of the Michigan Independent Citizens Redistricting Commission, a nonpartisan body tasked with fairly redrawing the state's congressional and legislative districts to put an end to gerrymandering.

Fair Maps, a group run by Republican operative Tony Daunt, is a leading opponent of the effort, the Intercept reports. Daunt, among other things, is a litigious 2020 election-denier and the former director of the Michigan Freedom Fund — a conservative, Devos-funded group that helped organize last year's traffic-jam protest in reponse to Whitmer’s stay-home orders.

He and Fair Maps have repeatedly sought to stymie the commission's work with the ultimate goal, critics say, of skewing the maps to benefit Republicans:

In 2019, the year after the MICRC was established, Daunt joined 14 people in filing a federal lawsuit that challenged the commission’s eligibility requirements. The suit asked the court to declare the commission unconstitutional and stop the secretary of state’s office from conducting its selection process, which excludes people who in the past six years have run for or been elected to office, worked as lobbyists, or been employed by a political party or the state Legislature. At the time, Daunt was a registered lobbyist, an officer and member of the local GOP, and a member of its governing body.

A federal district judge dismissed the case in July 2020, and an appellate court upheld the decision in May of this year. Daunt left the Michigan Freedom Fund and joined Fair Maps the same month.

Fair Maps has led the efforts to undermine the MICRC, with Daunt telling a local news organization last month that his group had not ruled out suing the commission for missing a September 17 deadline to release the draft maps. (The U.S. Census Bureau published its redistricting census data in August, four months later than usual.) On September 28, Fair Maps published a statement attacking the MICRC and claiming that the body “made a mockery of the promise of transparency voters were guaranteed in 2018.” The group’s Twitter account was suspended as of September 21.

Reckling ran unsuccessfully last year as a candidate in a Republican primary for the Michigan House of Representatives, receiving support from the DeVos family and the Great Lakes Education Project, a charter school advocacy group founded by DeVos.