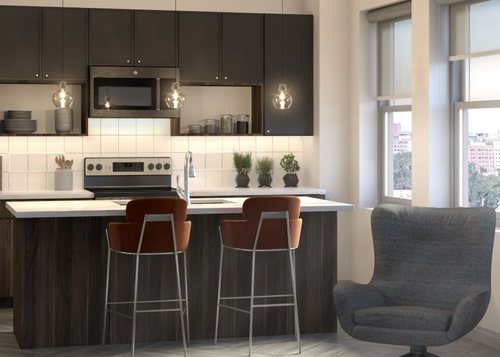 The unit is finished, the furniture staged, and an official with Olympia Development is standing before a crop of reporters as the sun streams in, wearing a hard hat and vest that belies its completeness. Online, lease applications are available for dozens of dwellings like this one.

All signs point to the Ilitch organization finally nearing fulfillment of a residential housing promise: To rehab the Hotel Eddystone, an Italian Renaissance structure erected in 1924, vacated in the '90s, and largely neglected by Olympia, like many of its neighbors, since 2010.

The company offered local media a tour of the $40 million development two weeks ago, saying tenants would begin moving in in November.

It's a statement that seems truthful given the pre-leasing options now on the Eddystone's site. Available are 15 studios beginning at $1,086 per month, 17 one-bedrooms from $1,452, and three two-bedrooms for $2,560. There will be 92 units across 13 floors, and the owners of nearby restaurant Grey Ghost say they're developing another concept for the ground floor.

The Downtown Development Authority required the project to be complete by Dec. 23 after the Ilitches blew past an initial deadline to rehab the building by 2018 — part of a deal that allowed the company to demolish a neighboring historic structure to make way for its Little Caesars Arena.

As of two weeks ago, some work on the Eddystone remained. From the Free Press:

Crews are still at work finishing the rest of the building, which will have numerous restored or reproduced historic features on the outside and inside, including a mahogany lobby and original corridor layouts for the upper floors.

Still, the nearly complete redevelopment, which the Free Press reports was able to overcome rising construction costs and labor shortages, could be a sign of more fulfilled promises to come.

One key reason is that two years ago, the Ilitch group hired a permanent, large-scale real estate team to oversee its plans. The staff of 40 is the first time the organization has had an in-house development unit since the company moved to the city more than 30 years ago. Before that, it relied on outside consultants. The team oversees the firm’s overall development strategy, including reaching out to local residents and organizations, handling construction projects and managing properties.

The Eddystone is one of three major residential developments planned in historic buildings controlled by Olympia. Another project would restore seven buildings on the Cass Avenue and Henry Street block. The other is the revival of the former United Artists building on Grand Circus Park. Plans to redevelop two other historic properties in the Ilitches’ portfolio — the Alhambra and Hotel Fort Wayne — were announced in 2017, but have not seen any discernible progress.