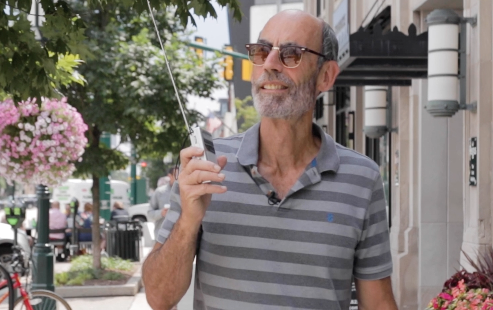 Hey Marty Greenberg, the 20th Century called and it wants its transistor radio back.

Greenberg, a retired 67-year-old businessman who lives in Birmingham, bought an old-school radio that he uses to listen to Tigers games and sports while on walks around town.

It was more common to see metro Detroiters walking with transistor radios in the 1960s, listening to music on WKNR and CKLW and Tigers broadcasts with Ernie Harwell and George Kell.

But those days are long gone, as Harwell would say.

These days, Greenberg strolls through Birmingham with his throwback, which has prompted funny looks from people, some of whom engage him on the device.

Deadline Detroit spoke to Greenberg the other day in downtown Birmingham.