Primary Day in Detroit: Info about candidates, Prop P and polling places is a few clicks away right here

It's municipal Primary Election Day in Detroit, a city of Democrats, meaning your vote counts today as much as ever. Polls are open until 8 p.m.

On the ballot are primaries to select two November finalists for each of four council seats, mayor and city clerk. Also on the ballot is a Proposal P question of whether to amend the city's charter, its governing document.

We surveyed candidates in council districts 1, 4, 7 and at-large. WDET spoke with every mayoral candidate. (Though Mike Money-bags Duggan may be a shoo-in, nine others have alternative visions for the city).

The Free Press covered the race to unseat embattled City Clerk Janice Winfrey, who is running for seeking a fifth term in what some observers say is "anybody's race." (The Detroit News editorial board endorses Michael Ri'chard, while the Freep backs Denzel McCampbell.)

Bridge Detroit has the most comprehensive explainer we've seen on Prop P. The powers that be say the proposed charter will bankrupt the city, but the elected committee that spent years cobbling it together with citizen input says it will improve Detroiters' quality of life. (Paywalled editorials in the Freep and Detroit News recommend voting "no.")

About 51% of the city's registered voters participated in last fall's 2020 presidential election, though far fewer are expected in today's mid-summer primary. About 14% of Detroit voters cast a ballot in the mayoral primary four years ago. 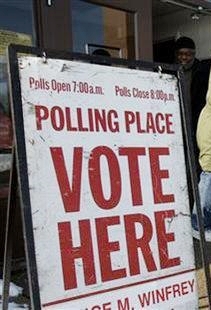 ► Where: Find your polling place or 19 Detroit absentee ballot drop boxes at the Michigan Voter Information Center. (There are fewer city drop boxes than the 32 in place last November. The Freep lists locations near the end of this article.)

► ID needed: Bring a photo ID such as a driver's license, state identification card, U.S. passport, or military, student or tribal ID card. (Address needn't be on it.) Those without an acceptable ID can vote by signing an affidavit.

► Face mask: Not required for voters, though poll workers will wear them. Sanitizing stations are at polling places.