The upbeat news is that event planners are pleasantly surprised by post-bankruptcy Detroit. The downbeat side is that some live nearby, but "hadn't been to Detroit in decades."

John Gallagher serves a mixed basket of reactions in a Freep look at how "Detroit lures major robotics show away from Chicago," with a bittersweet blend of quotes. 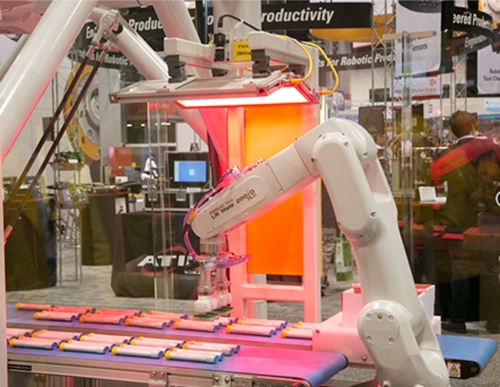 Factory robots will be exhibited downtown in 2021, 2023 and 2025. (Photo: Association for Advancing Automation)

The plum is Automate 2021, a sizable annual exhibition relocating from Chicago's McCormick Place, the largest convention center in North America.

More than 20,000 exhibitors and buyers of robots for use in many different industrial fields will spend four days in May 2021 in and around the soon-to-be-renamed Cobo Center.

And the Ann Arbor-based Association for Advancing Automation, which represents the robotics and automation technology industry and which hosts Automate every other year, has already committed to hold the 2023 and 2025 shows in Detroit as well.

This city snagged the show after "a site visit by some initially skeptical organizers," Gallagher writes. The group's 40 board members came in mid-2018.

The Free Press writer gathers these points of pride . . . and pain:

♦ "We talked to several cities and we concluded Detroit was the best choice." -- Jeff Burnstein, association president

♦ "There were people who were based in the Detroit area who said, 'We haven't been downtown in a long time.' They loved it, too." -- Burnstein

♦ "There's an opportunity for Detroit to showcase itself as the tech innovation hub that we all believe it's becoming." -- Robert Huschka, host group's education director

♦ "We had to overcome this initial hurdle . . . from people who hadn't been to Detroit in decades, hadn't experienced what's going on there now." -- Burnstein